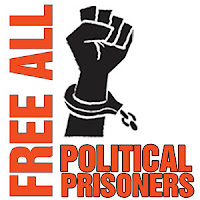 Human rights advocacy is under attack, and so are activists. We are censored, persecuted, and sometimes prosecuted on false criminal charges as punishment for speaking truth to power and standing with the people against tyranny. Arresting advocates like Ethiopia did to Andy Tsege serves two purposes: It rids oppressors of the activists' voices, and it also warns others not to follow the activists' obedience to Proverbs 31:8-9: "Stand against oppression of the poor and needy. Judge righteously. Speak on behalf of everyone who is appointed to destruction."

The wrongful conviction and incarceration of Rev. Edward Pinkney, of Benton Harbor, Michigan is an example of oppression to silence dissent. Pinkney is founder and director of the B.H. BANCO organization, and he hosted the "Pinkney to Pinkney" Blogtalkradio show on Sunday evenings. His principal fight is against what he called the corporate takeover of Michigan, beginning in Benton Harbor. Pinkney accused Michigan's governor and local government officials of being grossly unfair to Michigan residents in giving corporations large tax breaks at the expense of public services to the People. Pinkney also complained about officials giving away and selling public lands, then undermining the electoral process by setting city managers over the areas that had been impoverished by those same tax breaks that benefited wealthy corporations.

Rev. Edward Pinkney may be the first American to be ordered off the Internet by a court of law. That never happened to criminals using the Internet to extort people or to pedophiles who use the Internet to attract helpless children, but it happened to Pinkney. He used the Internet to decry Michigan's marriage of corporations and government, which left the citizenry in the position of unwanted stepchildren. Privatizing the water supply and lead poisoning of Flint's residents is an example of government disregard for human rights, which Pinkney opposes. Pinkney was charged with election fraud in connection with a recall petition he sponsored to remove Benton Harbor's mayor, Whitehead. Pinkney was tried and convicted without proof of wrongdoing by an all-white jury composed of people who live in the predominantly Caucasian community across the river from Benton Harbor. Pinkney was sentenced to serve up to 10 years in prison for a crime that never happened; therefore, he is no long on radio each Sunday calling Governor Snyder a dictator.

Pinkney's radio broadcasts had an open forum, and he gave voiceless people throughout America an opportunity to speak. His was one of the first radio shows that welcomed this writer, Mary Neal, who exposes the secret arrest (kidnapping) and euthanasia of Larry Neal and The Cochran Firm fraud. My brother Larry was murdered in Memphis Shelby County Jail after 18 days of secret incarceration. Few media companies will air news about the government abduction and murder of the black, mentally ill heart patient even now, 12 years later. Larry's murder is denied open disclosure, an inquest, investigation or explanation, and it remains unrequited. The cover-up around Larry's murder exists because Memphis Shelby County Jail was operating under an Agreement with the USA, and the United States Department of Justice (USDOJ) was in charge of the jail's operations at the time of the disabled American's demise. The USDOJ is complicit in the cover-up.

Whereas this writer was never brought up on false charges, I experience surveillance, financial persecution, and terrorism to discourage my justice quest regarding the secret arrest and wrongful death of Larry Neal and my advocacy for other mentally disabled Americans through an organization I founded and direct -- Assistance to the Incarcerated Mentally Ill ("AIMI"). I also experience censorship of articles, social media posts, and radio broadcasts on "Human Rights Demand" channel at Blogtalkradio. Censorship also happens frequently at a radio channel I host under National Network in Action (NNIA1). Examples are available online in "Justice Gagged" blog at Blogger (a link to the blog is below). Rev. Floyd Harris, Jr. directs NNIA and is assistant minister at New Light for New Life Church of God in Fresno, California. Harris recently faced criminal charges related to his peaceful participation in a "Black Lives Matter" march in Fresno. He went to court on January 6, 2016, and may now be on probation for his "offense."

Unfortunately, there are numerous political activists in U.S. prisons, including some who have been incarcerated ever since the 1960's. Most are people of color, as the USA strives to "maintain the status quo" (elite white supremacy). Numerous political prisoners were members of the Black Panther Party (BPP), including Mumia, who activists assert suffers medical neglect in prison. Political prisoner Leonard Peltier was a member of the American Indian Movement (AIM). Activist attorney Lynne Stewart became a political prisoner while providing legal defense for the Blind Sheikh of Egypt, Abdel-Rahman. Stewart was finally granted a compassionate release from prison, but the Blind Sheikh is serving a life sentence. He called for the ousting of Hosni Mubarak, Egypt's president (Mubarak was a Western-backed dictator who was later ousted by Egyptians). Abdel-Rahman and nine others were convicted of seditious conspiracy, which requires only that a crime be planned, not that any crime was necessarily attempted (Wikipedia).

More U.S. political prisoners are listed by the Jericho Project (link is below) and discussed during Ralph Poynter's weekly radio shows on Tuesday nights at 9pmEST at "Human Rights Demand" channel on Blogtalkradio -- "Ralph Poynter What's Happening." Political prisoners are often tortured, whether in the USA or other countries. Former BPP member Albert Woodfox is an example. For 43 years, Woodfox has been held in solitary confinement, mostly in the Louisiana State Penitentiary. On June 8, 2015, US District Court Judge James Brady ruled that the Angola 3's Albert Woodfox be both immediately released and barred from a retrial, yet he remains imprisoned today. Prolonged solitary confinement was determined to be torture by the United Nations, of which America is a prominent member. [Update: Woodfox was finally released from prison on Friday, February 19, 2016.]

Andy Tsege was abducted 600 days ago this week and taken to an Ethiopian secret prison as punishment for his political activism. Today he will spend his 61st birthday in a cell under sentence of death – the second birthday he has spent locked away from his partner and three children.

Andy is a British citizen, but the British government is refusing to act – despite both the United Nations and the European Parliament calling for his release. But thousands of us have taken action to make sure they can’t continue to quietly stand by while the Ethiopian authorities hold a British citizen in illegal detention under sentence of death.

Today Andy’s partner and three children will deliver our petition to 10 Downing Street - signed by nearly 130,000 of us - calling on Prime Minister David Cameron to intervene to secure Andy’s release.

Andy’s situation is now more desperate that ever – and a demand for his release cannot come a moment too soon. He was moved from a secret location to a notorious prison where torture is commonplace. He has no information about the charges against him. He only knows that he has been sentenced to death and could be executed at any time. As a result, his mental health has deteriorated rapidly. The experts have said that there is now an ‘urgent need’ to remove him from his current conditions.

Andy is a prominent political activist who spoke out against Ethiopia’s human rights record and was sentenced to death by the regime. He was standing up for vales that are important to us all – human rights, democracy and justice.

Nearly 130,000 of us, along with the UN and the EU, have demanded Andy’s immediate release – now it’s time that the British government stands up for one of its own citizens by doing the same.

Thank you for all you do,

Why Mumia Must Live, and US imperialism Must Die: The Link Between Political Prisoners and the War on Terror
http://blackagendareport.com/mumui-must-live

Healing Our Wounds: Restorative Justice Is Needed For Albert Woodfox, The Black Panther Party & The Nation --An Interview With Law Professor Angela A. Allen-Bell
http://angola3news.blogspot.com/2015/06/healing-our-wounds-restorative-justice.html


Demand the immediate release of all political prisoners!

"Power concedes nothing without a demand; it never has,
and it never will. ~Frederick Douglass 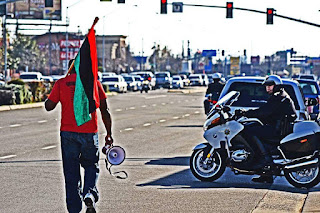 Comments are invited in the comments field below. Sharing all or parts of articles in the Human Rights for Prisoners March blog with a link to the source is encouraged.

Paragraph 1 repeated:
Human rights advocacy is under attack, and so are activists. We are censored, persecuted, and sometimes prosecuted on false criminal charges as punishment for speaking truth to power and standing with the people against tyranny. Arresting advocates like Ethiopia did to Andy Tsege serves two purposes: It rids oppressors of the activists' voices, and it also warns others not to follow the activists' obedience to Proverbs 31:8-9: "Stand against oppression of the poor and needy. Judge righteously. Speak on behalf of everyone who is appointed to destruction."
Posted by MaryLovesJustice Neal at 8:32 PM 1 comment: