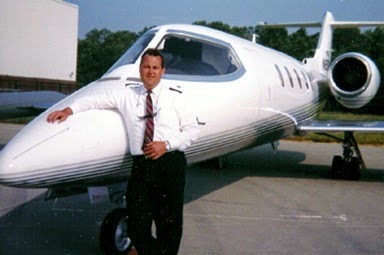 Dave Koch﻿ joins "Human Rights for Prisoners March" at 9pmPST on January 26 for Part 2 of his interview about successful reentry. He advises parolees on how to reinvent themselves. Join us by phone at (818)572-2947 or via computer at
http://www.blogtalkradio.com/nnia1/2015/01/27/dave-koch-joins-human-rights-for-prisoners-march-from-prison-to-the-ivory-tower

The Dave Koch interview Part 1 was taped at 3pmEST on Blogtalkradio on January 25. The archived tape is available at Blogtalkradio 24/7.
http://www.blogtalkradio.com/humanrightsdemand/2015/01/25/david-koch-advises-parolees-on-successful-re-entry We were joined on air by Nancy Lockhart, a justice advocate; Dr. Mustafa Ansari, an international human rights lawyer; and Joanna, administrative assistant of Human Rights for Prisoners March.

Koch reinvented himself after prison and believes we all can. His website is called "Self Reinvention" http://www.selfreinvention.org/

Don't miss this opportunity to converse with Dave Koch, who went from prisons to become co-founder, president, CEO and chairman of the 68th fastest growing company in America - Fiber Network Solutions, which was one of the companies that built the infrastructure of the Internet in North America. Koch authored "Slaying the Dragon," a book to inspire us all to conquer the dragons in our lives. Even released prisoners like himself can make it to the ivory tower.

"Don't tell me that you can't have a great life after serving time in prison! It requires work, and just don't quit!" ~Dave Koch

"The Urban News" published an article in 2009 about the ex-con who became one of the most successful men in the USA, called "Ex-Con Turned CEO Declares: 'Accept Self-Blame and Re-Invent Yourself!'"
http://theurbannews.com/lifestyles/2009/ex-con-turned-ceo-declares-accept-self-blame-and-re-invent-yourself/

Over 30 years ago, on August 7, 1980, at the age of 24, Koch was released on parole after serving both federal and state sentences of 18 months to five years. Koch made the commitment to never return to prison, and set out on his life-long journey, reentering mainstream society and pursuing a new life and careers that include; Flight Instructor, Airline Transport Pilot, Software Developer and co-founder, President & CEO of the 68th Fastest Growing Company in America - 2001 Inc 500 List.

Throughout his career as a pilot, Koch earned all of his commercial and instructor certificates and ratings, including the highest certificate attainable - the Airline Transport Pilot Certificate. Koch spent many years providing flight and ground instruction, and flying corporate jets, including the Learjet, Cessna Citation and Israeli Westwind II, and numerous turboprop aircraft. Koch co-founded Fiber Network Solutions during 1995 and served as its Chairman, President & CEO until he sold the company in 2003. Fiber Network Solutions was one of the companies that built the infrastructure of the Internet in North America. Fiber Network Solutions was started on a shoe string.

Among his many awards, Koch earned the Entrepreneur of the Year finalist, Best in Business, and was twice distinguished on the Inc 500 List of America’s Fastest Growing Companies - # 68 Nationally, and # 1 in Ohio. Koch’s life and career began after his release from prison. His compelling 30-year career as a member of mainstream society provides the irrefutable evidence that a successful reentry into mainstream society, a path of normalcy and legitimacy, and all of the rich rewards that life has to offer are attainable after a felony conviction and an incarceration event. Whether a person wants one or not, they are going to have a journey. The destinations of their journey are dependent upon the choices they make during their journey. (Background info re "Slaying the Dragon," by Dave Koch) 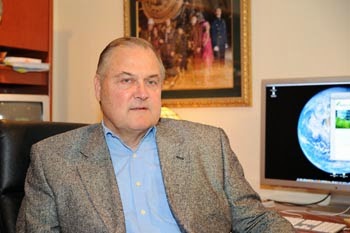 Dave Koch is at Google+

Repeat of paragraph 1 and 2:
Dave Koch﻿ joins "Human Rights for Prisoners March" at 9pmPST on January 26 for Part 2 of his interview about successful reentry. He advises parolees on how to reinvent themselves. Join us by phone at (818)572-2947 or via computer at
http://www.blogtalkradio.com/nnia1/2015/01/27/dave-koch-joins-human-rights-for-prisoners-march-from-prison-to-the-ivory-tower

The Dave Koch interview Part 1 was taped at 3pmEST on Blogtalkradio on January 25. The archived tape is available at Blogtalkradio 24/7.
http://www.blogtalkradio.com/humanrightsdemand/2015/01/25/david-koch-advises-parolees-on-successful-re-entry We were joined on air by Nancy Lockhart, a justice advocate; Dr. Mustafa Ansari, an international human rights lawyer; and Joanna, administrative assistant of Human Rights for Prisoners March. 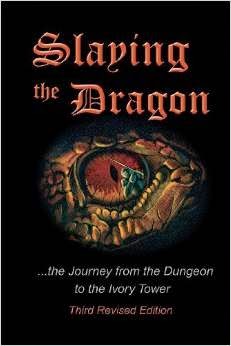 Thanks for participating in the "Human Rights for Prisoners March" across the Internet to demand respect for everyone, whether slave or free. All lives matter.
Human Rights for Prisoners March
http://HumanRightsforPrisonersMarch.blogspot.com
Blogtalkradio - Monday nights at 9pm PST
http://www.blogtalkradio.com/nnia1/
Mary Neal, director
MaryLovesJustice@gmail.com
Submit ideas and news tips for radio shows or volunteer to be a guest at
(678)531.0262 or (571)335-1741

Posted by MaryLovesJustice Neal at 7:29 AM 2 comments:

"Getting Away With Murder": George Mallinckrodt, Former DOC Psychoanalyst 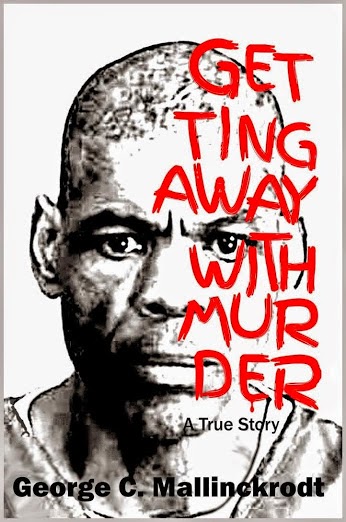 GETTING AWAY WITH MURDER - "Human Rights Demand" channel presents two interviews of the author, George Mallinckrodt. Call-in number (347)857-3293. Mallinckrodt was a licensed mental health counselor in the Florida prison system who helped reveal the murder by scalding of Darren Rainey and a pattern of abuse and cover-ups by the Florida Department of Corrections against mentally ill inmates. Part 1 aired live on January 11, 2015 at 3pm EST. Part 2 of our interview will air live Thursday, January 15, at 9pm EST. Both links are below:

You are invited to call "Human Rights Demand" radio broadcast and make comments or ask questions, which will be aired live on the show. The broadcasts will also be available via computer and archived at Blogtalkradio for future listening and sharing 24/7.

"The Florida Department of Corrections is riddled with amoral, sadistic sociopaths and the people who support, enable, and cover-up their crimes." ~ @GeoMallinckrodt . . . (Twitter address)

"If what is done to mentally ill Florida inmates was done in the military, these would be considered war crimes." ~George Mallinckrodt

Mallinckrodt advocates on behalf of the mentally ill. He recently met with with Senator Greg Evers, the Chairman of the Criminal Justice Committee, and staffers Amanda and Tracy. 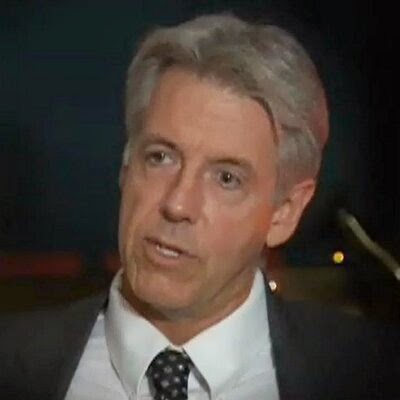 Order the book: "Getting Away with Murder".
http://www.amazon.com/Getting-Away-With-Murder-Story/dp/1500705624


Learning of Darren Rainey's death over two years ago, late June 2012, George Mallinckrodt authored Getting Away With Murder in frustration over the many dead-ends he encountered while trying to bring Rainey's killers to justice. The narrative follows George's progression from an idealistic psychotherapist to a prison hardened case manager in the Transitional Care Unit where Darren Rainey would be housed.

Refusing to let go of the notion he could make a difference, George encountered inmates with deep rooted pathologies he had only read about in psychology journals. Undaunted, he steadily set about helping those capable of benefitting from his nearly 20 years of counseling experience.

Behind the scenes, rumors began to circulate regarding inmate abuse. Guards cleverly masked their behavior by choosing the weak and mentally ill. They abused inmates at night when mental health staffers were not around.

Overly confident that their misdeeds would go unpunished, guards made the mistake of beating an inmate during the day as an eye-witness looked on. That was the day that changed everything.

George Mallinckrodt writes a gritty, mesmerizing account of his three years as psychotherapist in the "Transitional Care Unit" of the Dade Correctional Institution in south Florida, where inmates with mental health problems, including the most severe mental illnesses, are housed.

It's hard to put this book down. Although the subject is depressing, he weaves ribald prison humor and lively dialogue into his story. Mallinckrodt tells of his struggle with "being in prison" at a difficult and frustrating job. It is also a story about the inhumane and dangerous conditions for inmates in a run-down, poorly managed prison. Retribution keeps the inmates and the staff from reporting abuse. His journey from stressed out employee to prison rights advocate takes on greater urgency when a mentally ill inmate is brutally tortured and murdered by corrections officers in the prison and incident is completely covered up by authorities. (The investigation of the murder of the mentally ill inmate has still not been completed two years later.)

This book leaves you with the uncomfortable knowledge that terrible abuse is probably happening to inmates on a daily basis in badly managed prisons throughout the U.S., especially to inmates suffering from mental illness. If it were not for a few brave souls who are willing to report it, like Mallinckrodt and the inmates themselves, no one would ever know.
*****
PETITIONS FOR JUSTICE FOR DARREN RAINEY
A Change.org petition with roughly 205,000 signatures demands a federal investigation
into Darren Rainey's death.
https://www.change.org/p/attorney-general-eric-holder-investigate-the-2012-death-of-mr-darren-rainey-a-mentally-ill-florida-prisoner-who-died-after-prison-guards-locked-him-into-a-180-degree-shower

PETITION TO SAVE HAROLD HEMPSTEAD
Harold Hempstead is the Florida inmate who heard Darren Rainey screaming for help and begging for mercy as he died in the scalding hot shower where he was dragged and locked in by murderous corrections officers. Harold is serving a long prison sentence and is concerned about his safety in the Florida prison system. Retaliation against whistleblowers is common. His brave sister, Windy Hempstead, launched a Change.org petition to improve security for Harold Hemptstead by relocating him to federal custody.
https://www.change.org/p/u-s-department-of-justice-transfer-my-whistleblower-brother-for-his-own-safety-his-life-is-in-danger

As Mallinckrodt said, "This is not an isolated case. Prisoner abuses are happening all the time." Read a series of articles about Darren Rainey and the torturous incarceration of other mentally ill inmates in Florida published by The Miami Herald. See also an article in "Justice Gagged" blog about censorship applied to the George Mallinckrodt's interviews at "Human Rights Demand" channel on Blogtalkradio. Censorship that was applied at the 1 hour 20-minute mark to the interview on Sunday, January 11 cleared after Mary Neal left the show. It is a miracle if you are allowed to read this, because the screen goes blank before the article opens on my view.
http://justicegagged.blogspot.com/2015/01/getting-away-with-murder-radio-show.html

*******
Thank you for giving assistance to brutalized prisoners.

How can you help? Follow this blog, share this article, listen to the George Mallinckroth interviews on January 11 and January 15, and share the links with your social networks. George Mallinckroth experienced retaliation and is no longer a psychotherapist for Florida DOC. Please purchase a couple of his books - one for yourself and one for a friend or relative. We must support people with careers in law enforcement and corrections who blow the whistle on brutality and murders.

Posted by MaryLovesJustice Neal at 11:53 AM 3 comments: 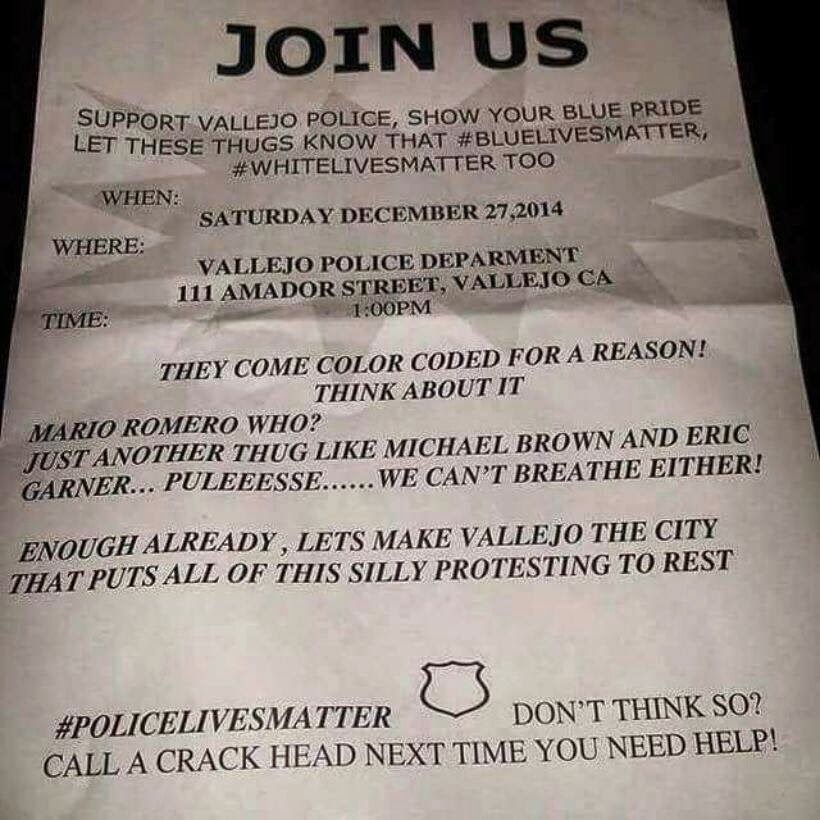 The photo above appeared on the Justice for Chavis Carter page at Facebook. I cannot say whether it is an authentic announcement that was distributed about or by the Vallejo Police Department.
https://www.facebook.com/Support4ChavisCarter

Posted by MaryLovesJustice Neal at 8:59 PM No comments: