Leonard Peltier Writes from Prison at 71 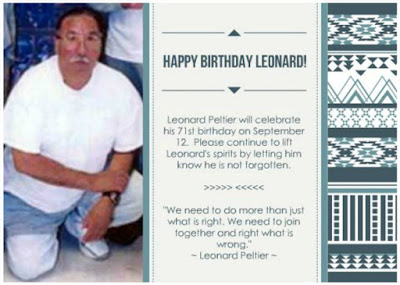 Published September 12, 2015
http://www.freepeltiernow.org/
COLEMAN, FLORIDA – Leonard Peltier is celebrating his 71st birthday today. Peltier is incarcerted at the U.S. Penitentiary in Coleman, Florida  for his 1977 conviction in connection with a shootout with U.S. government forces, where two FBI agents and one young American Indian lost their lives.
Peltier released the following statement from prison today:
September 12, 2015
Greetings everyone,
Well, today is another b-day for me — my 71st. I had hoped I would not be here at this age, but that’s not to be. So, I have to take a deep breath and slowly let it out… and prepare myself for yet another day in here.
February 6th marks my 40th year in prison. How many of you know that when I was indicted a life sentence was 7 years? I was sentenced to 2 life sentences, so with good time I have served 6 + life sentences. I suppose all of this time has taken its toll on my body. I have a number of different health issues that come with old age. The one I’m most concerned about is my prostate.
Otherwise, I’m still getting compliments on how good I look for my age (smile). People can be nice and say things that make me feel good once in awhile. But I’m told this so often that I’m starting to believe it (smile).

HEY, DID YOU KNOW THAT THE LAST TIME I WENT BEFORE THE PAROLE COMMISSION (2009), I WAS DENIED BECAUSE I LOOKED YOUNG AND HEALTHY… AND A REASON GIVEN FOR DENYING ME PAROLE WAS THAT I MIGHT BE TOO MUCH OF AN INFLUENCE ON THE YOUNG NATIVES? YEAH, ONLY IN AMERICA. Well, People, I don’t know how much longer I have left on Mother Earth — or if I will even be around for the next few years — but I always hope and pray that I can be out there to spend my last few remaining years with you. If not, so be it. I have been in here too long to cry now. I just wish for more time to give to my People and to all freedom loving People in the world.

And get this: In October 1984, when the Parole Commission was repealed by Congress, the Commission was given six years to give me a parole date… all of us “old time” prisoners really (those convicted prior to 1984). Yes, this is all true. All you have to do is research it, and I bet you will come away shocked as hell that this can happen in your country. The Parole Commission is the only Government agency that has been repealed and reinstated 35 days later without having to go through the normal congressional channels and signed into law by the President. How does this happen in a democracy?
I’ve been encouraged by things I’ve read recently though. And looking back… It’s been over 60 years, maybe a little longer. I was around 7 or 8 years old when I heard the old People talking about taking care of Mother Earth. But for me anyway, as with all young People, I did not really understand what they were trying to tell us, I guess? But I see today the traditionalists were correct and AIM People were right when we took it up as a rallying cry to the world. Still, when we spoke out against the destruction of Mother Earth, we were called a bunch of nuts. Well, today, it is called climate change, and there are now millions of us crying out against the destruction of out Mother Earth. Amazing, huh? Thankfully I have lived this long and can see we just might win this war. I know it’s not over — far from it — but the world is waking up and talking about it now. So, it can be won in our lifetime.

Thanks again for all of the love you have shown me over these 40 years. You have all been worth it.
In the Spirit of Crazy Horse…
Doksha,
Leonard Peltier
http://www.freepeltiernow.org/
Thanks for participating in the "Human Rights for Prisoners March" across the Internet
to demand respect for all people. All lives matter.
"Human Rights for Prisoners March" blog
http://HumanRightsforPrisonersMarch.blogspot.com
NNIA1 and Human Rights Demand Blogtalkradio channels
http://mljradio.blogspot.com
Mary Neal, director
MaryLovesJustice@gmail.com

Posted by MaryLovesJustice Neal at 8:27 PM No comments:

Lorenzo Johnson: In, Out, In 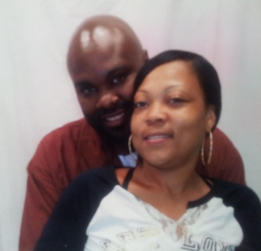 We have a serious problem in this country when it comes to the prosecutors who fail to serve the public. Prosecutors are very powerful and have vast resources at their disposal when seeking convictions. While some prosecutors do their work honestly and defend justice, there are others who are responsible for intentionally condemning innocent people. As if this were not enough, they have all that is necessary to maintain these false convictions.

Last year, a record 125 innocent prisoners were exonerated. This high number does not scratch the surface of the actual number of innocent prisoners who are still fighting to prove their innocence. I'm one of them. We are in a scary position, because for many of us, the same prosecutors who served us our injustice remain on our cases. Or new prosecutors have taken their place, only to turn a blind eye to what happened and to keep us living our nightmare. For them, it's just another day of work.

I am one of many innocent prisoners who can demonstrate blatant misconduct of the continuous pursuit. This fault caused me to receive a sentence to life imprisonment for a crime I never committed. I was released from prison in 2012 by the Third Circuit Court of Appeals, which stated that the evidence used to convict me was insufficient as a matter of law. It was not good enough for the prosecutor on my case, who filed an appeal to the Supreme Court of the United States, which led to my wrongful conviction being restored.

After only 148 days reunion with my family, I had to return to a life sentence that did not belong to him me. But I didn't stop the fight. My legal team reviewed my case from top to bottom. We discovered that the prosecution actually knew that I was innocent from the first day. After 19 years, the prosecution has recovered the missing documents from my case of discovery. None of my lawyers had ever seen the documents before. These documents have confirmed that the prosecutor knowingly and voluntarily allowed perjury from the state's main witness, who, we have also discovered, had been a suspect in the murder. In his speech to the jury, the prosecutor in my case said he had to believe this witness because she had no reason to lie. He omitted informing my defense and the jury that this same witness was a suspect in this case.

My attorney, despite all these revelations of my innocence and a mountain of evidence proving prosecutorial misconduct, continues to oppose my justification or a new trial. To do this, it is not based on his testimony; neither is it based on my guilt. He is standing on procedural grounds, claiming that I filed my call late. Surprisingly, my attorney blamed me for not finding this new evidence earlier. His argument is that his office had an "open file" policy with my trial lawyer. However, I have signed statements from my original lawyers saying that they never saw these documents and that if they had, they would have used this information to attack the witness. Once again, I'm just one of many innocent prisoners of whose case proves the prosecutors are not affected by justice. For them, it is mainly about maintaining our convictions.

As innocent prisoners, we call on the rest of society to be as outraged as we are that this type of fault is so common in our judicial system. I speak facts that you can check for yourselves. I'm one of the skeletons in the closet of prosecutors who have maliciously imprisoned an innocent man. Without the attention and the support of the public, this injustice will never end. Every week, you see one of us on CNN. Take a look at Albert Woodfox's nightmare. After more than forty years, a federal judge ordered his release. The prosecution in his case knows that he is innocent but continues to fight against his release. The widow of the victim in case also accepts that Woodfox is innocent and must be released. This kind of support from the family of the victim is rare. But prosecutors are not interested in justice in our cases.

I congratulate the district attorney of Brooklyn, Kenneth Thompson, for the excellent work he has done by helping the exemptions who came out of his office. We need more prosecutors like him who stand for justice. When has it ever been acceptable to kidnap someone, remove the person from his loved ones, and place him in a cage for nothing? The time that we innocent prisoners are behind bars varies; it may vary from one day to our natural lives. This is our reality when prosecutors ignore our innocence and deprive us of justice. My talking openly about the truth has made my battle against an unjust prosecutor even more difficult. But what am I supposed to do -- just sit quietly in this cell and to serve a sentence of life when I'm innocent?

Lorenzo Johnson served 16.5 years of a life without parole sentence, from 1995 to 2012, before the Third Circuit Federal Court of Appeals ruled that there was insufficient evidence to support his conviction. Johnson had been free for four months before the U.S. Supreme Court unanimously reinstated the conviction and ordered Lorenzo back to prison to resume serving the sentence. With the help of Michael Wiseman, Esq., the Jeffrey Deskovic Foundation for Justice, the Campaign to Free Lorenzo Johnson, and others, he continues to fight for his freedom. Please sign his petition and learn more: www.freelorenzojohnson.org/sign-the-petition.html.

Posted by MaryLovesJustice Neal at 8:12 PM No comments: