Willacy County, TX Prison Riot and Giants Who Caused It 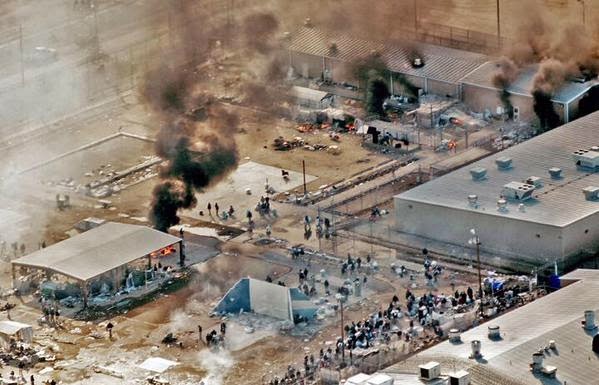 Friday morning, the inmates at the Willacy County Correctional Center, in southern Texas, refused to report to work and eat breakfast, the Valley Morning Star reported. Inmates then “breached” their housing units — which are a collection of massive tents — and entered the yard, the Associated Press reported. The prison is now uninhabitable. The prison's pattern of abuse of inmates that was established in a criminal case against federal officials in 2008 was never properly addressed. Instead, the prisoners' abuse was swept under the rug, like most brutality in American correctional institutions is, whether in domestic jails and prisons or in overseas War on Terror camps.


Russia Times reports, "After 2,000 inmates, mostly immigrants, took over a Texas prison in a riot over poor medical services, federal authorities have decided to relocate all the detainees from the now “uninhabitable” correctional facility. The riot at the Willacy County Correctional Center erupted on Friday afternoon, when prisoners refused to eat breakfast or report for work to protest medical services at the facility." http://rt.com/usa/234471-texas-uninhabitable-prison-riot/

I wrote about Wallacy County, Texas jails and prisons and a brave district attorney who brought Dick Chaney, Antonio Gonzales, and other federal and local officials up on charges for prisoner abuse in 2008. The information was placed in an article about Johnnie Cochran, which CoIntelPro blacked out to prevent a friend from reading yesterday: Johnnie Cochran's CoIntelPro Murder Theory, at http://freespeakblog.blogspot.com/2011/04/johnnie-cochrans-cointelpro-murder.html 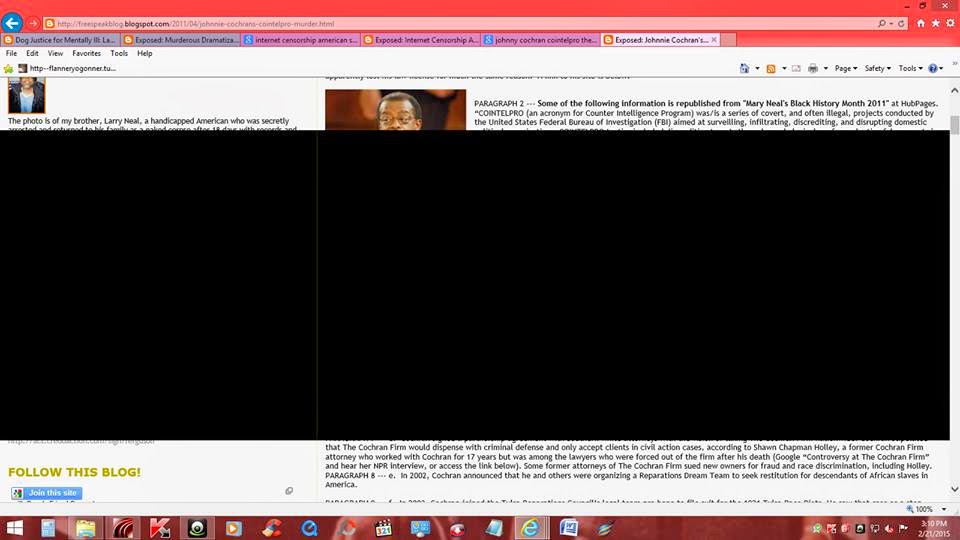 Wallacy County, Texas is where VP Dick Chaney and former U.S. Attorney General Antonio Gonzales were indicted for prisoner abuse in 2008. They were accused of withholding federal investigations of prisoner abuse and wrongful deaths in exchange for prison stock and other good and valuable consideration. The case never went to trial. Instead, the D.A. was brought up on false charges and lost his reelection bid.

The judge, who Prosecutor Juan Guerra had asked to recuse himself, dismissed the case against high federal officials and local judges. Information about Juan Guerra, the fearless D.A., is in an article I authored called "Johnnie Cochran's CoIntelPro Murder Theory," which CoIntelPro may not let you read. They would NOT let a friend read the article yesterday. Stalkers blackened her screen. She took a screenshot and posted it at Facebook, and stalkers made it invisible on her Facebook screen for everyone except her. https://plus.google.com/+MaryLovesJustice/posts/MP1zSdPweCo

Apparently, the Justice Department still takes payoffs to help cover-up prisoner abuse and wrongful deaths. That is likely why my family is not told how and why Larry Neal was secretly arrested for 18 days and murdered in Memphis Shelby County Jail in 2003, and we are DENIED any explanation, excuse, inquest, documents, and information about his secret incarceration for 18 days and murder, +United Nations. It is sad to know that the prisoners in Wallacy County, Texas are still enduring so much abuse that they riot, which is an act of desperation. ﻿

It is wrong to use one's position over justice in America to withhold justice for monetary gain, if that is happening, and cause prisoners and their families to suffer. It shows deprivation of character to bring false charges against court officers like Juan Guerra and to possibly kill defense lawyers like Johnnie Cochran for working to improve justice in America and apply the protections under the U.S. Constitution and the Universal Declaration of Human Rights to inmates. It is horrible to censor people like Mary Neal who write about these crimes against humanity. American officials use surveillance technology and their executive authority to conceal rather than correct injustices.

At least four cyber stalkers go online with me whenever I do, and they interfere with my ability to communicate with the public about such abuses as those that led to the latest riot in Wallacy County, Texas. Yesterday, a woman who sent me messages about her mentally ill sister who faces criminal charges in California was told twice by AT&T that my home phone number is disconnected, although that is a lie. I have reported the sabotage against my communication to DeKalb County Police, and Detective Wilson said sending viruses and Trojans to my computers and preventing my ability to communicate by telephone and computer takeovers are not illegal. The FBI, Homeland Security, U.S. Attorney's Office, USDOJ, and other government officials have all been notified, as have many media companies. The general consensus is that secret arrests, brutality, and murders of prisoners in the United States must be tolerated and discussion around these issues must be silenced. Therefore, prisoners riot.

Please pray for the prisoners in Wallacy County, Texas and throughout America, where inmates are boiled to death, starved to death, baked to death, Tasered to death, beaten to death, misused for medical experiments, and possibly killed for their organs. Families like mine are subjected to financial persecution, false arrests, gangstalking, and aggressive censorship for exposing our relatives' covered-up murders. My street, a quiet circle in an Atlanta surburb, looks like an expressway sometimes with all of the Negro gangstalkers driving by my home repeatedly for intimidation to silence my complaints about my mentally ill brother's lynching and the continuing abuses against America's prisoners.

We must not be silent. As long as brave prisoners whose lives are directly in the criminals' hands have the courage to resist prisoner brutality, we prisoners who are on the outside can do no less.

I understand your warnings, Mr. Holder, Mr. Chaney, Mr. Gonzales, Mr. Comey, Mr. Johnson, Mr. Kerry, and other Genesis 6:4 giants, if the warnings to stop advocacy for prisoners' human rights or face severe consequences come from you. I understand your power using NSA, militarized police forces, NDAA, and extrajudicial assassination rights that were illegally assigned. But I cannot hear your warnings. There is somebody BIGGER than you and I, and it is only His voice that I can hear. He said:


"But ye believe not, because ye are not of my sheep, as I said unto you. My sheep hear my voice, and I know them, and they follow me: And I give unto them eternal life; and they shall never perish, neither shall any man pluck them out of my hand. My Father, which gave them me, is greater than all; and no man is able to pluck them out of my Father's hand. I and my Father are one. " ~John 10:26-30

Many people have learned about brutality and murders of America's prisoners. We are of different religions, nationalities, races, and ethnic groups. We are on a human rights for prisoners march, and we are ONE.

***********
Thanks for participating in the "Human Rights for Prisoners March" across the Internet
to demand respect for all people. All lives matter.
Human Rights for Prisoners March
http://HumanRightsforPrisonersMarch.blogspot.com
Blogtalkradio - Monday nights at 9pm PST
http://www.blogtalkradio.com/nnia1/
Monday, Feb. 23, we will discuss the Wallacy County Correctional Facility riot.
Mary Neal, director
MaryLovesJustice@gmail.com

Posted by MaryLovesJustice Neal at 11:28 AM No comments: