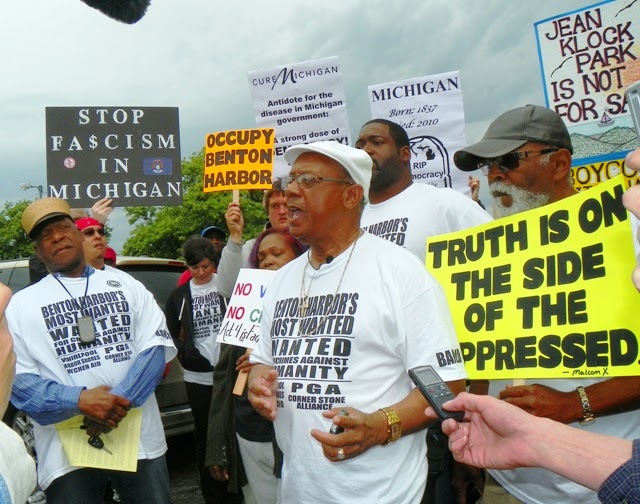 On December 15, 2014, Rev. Edward Pinkney was sentenced to serve from 2.5 to 10 years in prison. He was convicted by an all white jury of election fraud in connection with the successful petition to recall Mayor Hightower, of Benton Harbor, Michigan. Mayor Hightower is perceived by the signatories on the petition as an official who represents corporate interests rather than the interests of his constituents. Americans have the legal right to elect and recall public officials, but exercising the right of recall might get activists arrested.

Below are excerpts from four news articles about Pinkney's trial and prison sentence.

(ATLANTA BLACK STAR) Pinkney’s supporters say altering a petition document should have been a misdemeanor offense, not a felony—and there was no evidence to support the charge because no signatures were forged and all signatories testified that they signed willingly on the correct day.

During Pinkney’s trial, a forensics expert for the prosecution testified that there was no way to determine who changed the handful of dates. Still, the all-white jury accepted the prosecutor’s contention that no direct evidence was required; the prosecution told the jury they only had to “believe” that Pinkney was motivated to cheat and that he “could” have changed the dates while circulating the petitions.

“Rev. Pinkney was accused of writing and changing my date on a petition when, in fact, I wrote my own date and changed it after realizing I had put the wrong date down,” Mary Alice Adams, a Benton Harbor commissioner, said.


(TRUTHOUT) Pinkney is founder of BANCO, the Black Autonomy Network Community Organization, and is arguably the loudest, most outspoken activist in Benton Harbor, which fell under the dictatorship of emergency management in 2010. His organization holds spirited rallies and takes political action against what the group claims is rampant government-corporate collusion, police corruption, economic injustice, and a discriminatory - even "genocidal" - plan for gentrification of the city.

Witness after witness stood up to the prosecutor who put not only Pinkney on trial, but also his community organization, BANCO. The prosecutor hounded the witnesses to "confess" that somehow the dates were altered, and questioned if they were card-holding members of the BANCO organization. The scene held shadows of a McCarthy-era House Un-American Activities Committee witch-hunt.

"Here, Whirlpool controls not only Benton Harbor and the residents, but also the court system itself. They will do anything to crush you if you stand up to them. That's why it's so important to fight this. I'm going to fight them until the end. This is not just an attack on Rev. Pinkney. It's an attack on every single person that lives in Benton Harbor, in the state and around the country." - Rev. Edward Pinkney

(COUNTERPOINT) Overall more than 700 people signed the recall petitions most of which were validated by the local election commission. A date was set for the recall election.

Nonetheless, after Pinkney was indicted and placed under house arrest for several weeks, the recall election was cancelled by a local judge raising questions about the signatures. Yet later, another judge certified the petitions and authorized the recall election to proceed.

The local authorities in Berrien County challenged the election that was scheduled for November 4. The Michigan Court of Appeals then cancelled the recall elections again. Hightower remains in office and was called as a prosecution witness during the first day of the trial.

(VOICE OF DETROIT) Over the past decades, Whirlpool has shut down numerous plants in the city that once employed residents, and has been conducting a massive take-over of choice Benton Harbor land, including that surrounding the gorgeous Lake Michigan beach which is part of the public Jean Klock Park.

[After the income tax did not pass] Hightower took out a $2.3 million loan to finance city expenses, pushing the economically-strapped city further into debt.

Whirlpool has put their brand new headquarters on riverfront property in Benton Harbor, and built a luxury golf course and residential development directly off the Klock Park beach.


*****
Rev. Pinkney met routinely with community organizers. See a Pontiac, Michigan man complain to Rev. Pinkney on film that his city is also being taken over for private corporate interests http://youtu.be/R-OI_6IFRf0

The entire world was shocked when water was shut off for thousands of Detroit households, and parents feared their children would be removed from their custody.
RT - "Detroit's humanitarian crisis: thousands left without water"  http://youtu.be/lAT6DyuOFvk

With Benton Harbor more in debt than ever, under the loan arranged by Mayor Hightower, it is likely that more public land might be sold to pay the loan. Perhaps it will even be sold to Westinghouse, especially with Rev. Edward Pinkney out of the way.

Michigan is under seize, and one of her most outspoken leaders for justice has just become a political prisoner. Perhaps Pinkney's conviction by an all-white jury and his sentencing without any evidence of criminal wrongdoing will warn other community leaders throughout America who oppose the marriage of government and Big Business and privatizing public lands and resources. Americans might even learn not to complain when multi-billion dollar corporations are excused from paying taxes.

See seven links below, five of which lead to the complete articles from which excerpts herein were provided. Visit also Rev. Pinkney Blogtalkradio page at Facebook for updates and his website, B.H.Banco.org.

Posted by MaryLovesJustice Neal at 8:02 PM No comments: